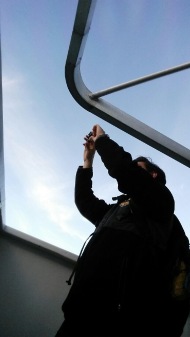 Brennan Kennedy is a sophomore scholar and Luckyday mentor. He has been to California before on a show choir competition trip. He was interested in this trip because he really wanted to go to Yosemite. Studying geology peaked his interest in seeing more of our national treasures.

On Sunday night of the trip, everyone could do their own thing around San Francisco, choosing their own place to eat and exploring the city. Brennan was exploring the city with a few other students. Brennan wrote a post in the GroupMe app, used for the group to communicate, that night: “We just met the most amazing German tourist, Oolie! He gave us directions on the street after a cable car almost ran me over! Bahaha!! He knew everything about San Francisco and was so very enthusiastic about giving us tips about whats around town. I’m so glad we can communicate mutually and enthusiastically with foreigners and all get along no matter our origins!! Thanks Oolie!”

Brennan was impressed at how nice the residents of San Francisco were to these students from Mississippi. He and others used the public transportation system in San Francisco quite a bit. They did fairly well finding their way around. The only exception was when they went to see the Golden Gate Bridge, got back on a bus, and ended up back at the Golden Gate Bridge. One thing that surprised him, however, was the number of drinks they had that were not served with ice. Why don’t these people enjoy cold drinks?!