After moving to college, many students attempt to make connections so that they can make The University of Southern Mississippi feel like home. For freshmen Luckyday Scholars, this process is not as nearly as hard as one may initially think. From borrowing clothes to sharing food, many of the residents of Luckyday Citizenship Hall become like a family members. The open floor plan of the kitchen, living space, and hallways of each floor encourage interactions among the dwellers. Not only have the residents become familial extensions of each other but the Residence Life staff have as well. The custodial staff, in particular, are the true backbone to the functioning of Luckyday Citizenship Hall as they keep things in working order and make the space more comfortable, much like a home.

On January 21, 2017, a tornado came through Hattiesburg and Petal. The two cities woke to fallen trees, roofless buildings, and downed power lines. Many who were not affected by the tornado’s devastation eagerly wanted to do something to help. The talk among the residents in Luckyday Hall was that they wanted to help in some way but they didn’t quite know where to focus their efforts. Karis Hill, a first-floor Resident Assistant, chose to organize a project using a personal approach. During the storm, one of the custodians from the hall, Andrea Jones, sustained massive damage to her house. With this knowledge, Karis Hill organized a cleanup project to help Andrea with recovery efforts. Soon enough, residents from the first, second, and forth floors were at Andrea’s house with gloves on their hands, ready to get to work. 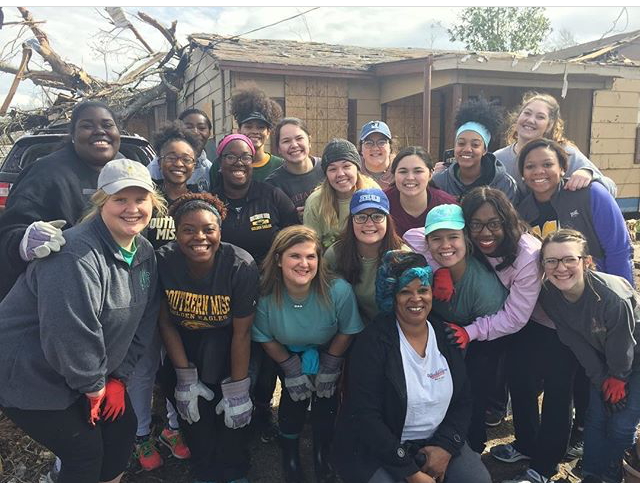 Taking time out of a weekend to help a woman who helps take care of them five days a week was the least the ladies of Luckyday Citizenship Hall felt like they could do. Just as many of the residents  have become like family to each other, Andrea has become like family to the students. Those who volunteered that day felt that giving back to someone who gives of themselves everyday was the most rewarding aspect of the project. Andrea stated, “I was so happy and my family was so happy to see everyone come out to help!”

Grateful to have the TRIAD AmeriCorps Team  from Institute for Disability Studies partner with us to do some service work on campus!   
Luckyday seniors! Where did the time go? No literally… we feel like we lost two years with you ❤️Best to all of you on a bright future ahead! #ldclassof2022
This year at the Luckyday Gala, we will be giving out “Cafe De Frank” mugs! Purchase your Gala ticket today to secure your mug! Designed by: @desiree_rose697 💃🏻🍽⚜️🎼✨
Join us for “Beignets on the Bayou” on Tuesday, April 12th, from 5:30-9:30 pm in the MPR! We will be serving beignets and coffee! You can purchase your Luckyday Gala Tickets during this time, too! ☕️⚜️✨🍽
It’s Friday! ✨Have you bought your Gala Tickets yet? Tickets are $20 until April 14th! 🎉💃🏻🍽
Join us for a “Night in Nola” on May 6th on the top of the Touchdown Terrace at The Rock! Tickets are $20 from today-April 14th and $25 from April 15th-29th! You can purchase your Gala tickets in the Luckyday Office! 2022 Luckyday Gala 💃🏻🎼🍽✨
Loading Comments...
%d bloggers like this: